World famous beaches, historic castles, Mycenaean palaces, an important wetland and princely hospitality – all packaged in an ideal sailing holiday destination Greek summer at its finest: beautiful beaches, quaint fishing villages, endless olive groves, coastal and mountain trails with glorious views in Western Messinia. Local organic products and gastronomy taste tours. And beyond that: ancient civilisations, Mycenaean palaces and the Gialova wetland, the only one of its kind in Greece. You’ll go hiking at Paleokastro, walk around the ruins at Neokastro and at the Methoni and Koroni Venetian castles, followed by a lovely lunch or dinner on board on an all day or overnight private anchorage place within the peace and the tranquility of crystal clear water bay. A night sky full of bright stars, away from city lights, is the pay off of the trip.

Υοu will not miss though tavernas on the water, serving fresh fish and meze.

Voidokilia a horseshoe shaped beach with brilliant turquoise water set among sand dunes just north of Navarino bay. There is a ‘must do’ walk here, but it involves a steep scramble, so take good walking gear! We anchor in the north corner. Ashore, turn left and walk to find a sign to the castle. Ignore “no entry” signs (a disclaimer, should rock fall from the arch above!). Go to the north end of the castle; great views. Scramble through a hole in the wall at the north end, and follow the steep and rocky path (more scrambling down than walking) to Nestor’s Cave. Walk down to the golden arc of Voidokilia. Have a swim to cool off. Walk back to the boat along the side of a brackish lagoon (home to a wide variety of sea birds, chameleons and tortoises). The east end of the lagoon is a twitcher’s paradise in the evenings. Piece by piece, you’ll put together this puzzle that is Western Messinia. You’ll travel and explore and quickly settle into the Messinian rhythm. One summer is never enough. You’ll want to return here, to Western Messinia, year after year.

Methoni is a beautiful coastal hamlet of the south-western Peloponnese. It is located at an altitude of 20 m, 32 nautical miles away from Kalamata. It is built on the ruins of the ancient town of Methoni and is regarded to be one of the most historic cities of the Peloponnese. Methoni became known for its port which was of great strategic and commercial importance to both the town itself and the surrounding area. There you can also find the imposing Venetian Castle, one of the largest in the Mediterranean, which is famous for its fortified position during the Middle Ages and the Ottoman period. This is the reason why many people tried to conquer it over the centuries, such as the Franks, Venetians and Ottomans. Methoni is nowadays one of the most beautiful areas of the Peloponnese. Its natural beauties, its historical sites and amazing beaches have turned it into one of the most popular tourist resorts of Messenia and the southern Peloponnese.

Pylos is a beautiful town of about 3,000 residents in the prefecture of Messenia, on the southwest side of the Peloponnese. The city is built around a natural harbor in the bay of Navarino. It is surrounded by the waters of the Ionian Sea opposite the island “Sfaktiria”, 40 nautical miles away from Kalamata, the capital of Messenia. Pylos was built in 1828 by the French expedition of General Maison. It spreads over two hills in the Bay of Navarino and is one of the largest natural harbors of Greece. At the southern entrance of the bay, there is “Niokastro”(New Castle) which was built by the Turks in 1573 and took this name as opposed to “Palaiokastro”(Old Castle) which was built by the Franks several years ago and is located at the northern entrance of the bay, on “Koryfasio”, a rocky hillside. Pylos had a strong presence in different historical periods and this is the reason why it is now so well-known for its many historical and cultural monuments. It was founded by Pylos and was initially called Koryfasio. Homer refers to Pylos as the Palace of Nestor.

Pylos is characterized by a rare beauty, which has a lagoon of great ecological significance, that of “Yalova”, which is a wetland habitat for many migratory birds. Beneath the hill of Paleokastro spreads the magical Bay of Voidokilia with its famous turquoise waters and golden sand. Visitors can also spend pleasant moments along the picturesque harbor, where there are several restaurants and cafes. From Pylos one can easily access nearby regions such as Methoni, Finikounda and Voidokilia not only for swimming but also for eating outside. Although Pylos is considered to be an ideal destination for families who wish to spend their summer holidays, Pylos offers pleasures and fun throughout the year. 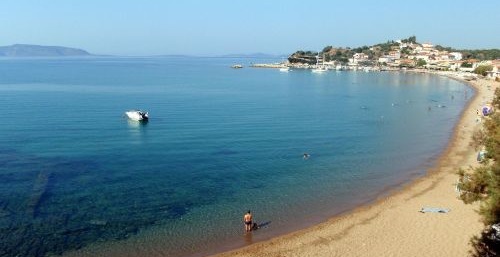 Finikounta is a picturesque little fishing village built on the shore of the sea, located between Methoni and Coroni, in the south-western part of the Peloponnese, in the Messinia Prefecture. It is located at a distance of 30 nautical miles from Kalamata the capital of the prefecture. Finikounta has approximately 600 inhabitants, and its own elementary school, gymnasium and Lyceum. The Church and the Central Square of the settlement complete discretely its profile; while the nearby attractions of the broader region of Methoni’s municipality (such as the Castle and the impressive Lighthouse of “Oinousses”), among many other things, create a pleasant ensemble for the tourists, which covers all tastes and constitute a pole of attraction for many visitors from all over Greece.

Koroni, the seat of the municipality of Koroni, is a picturesque town with a Venetian Harbour in the Prefecture of Messinia. It is built amphitheatrically and offers a magnificent view to the Messenian Gulf and the imposing Mountain “Taygetos”. The city is beautiful with narrow streets and houses with terrestrial colouration, which haven’t changed much from the Venetian period. Medieval mansions and churches are extended to an impressive labyrinth of narrow streets which embrace the town like ribbons and guide to Akrotiri and the castle of the city. According to an ancient tradition, Koroni took its name from the copper currency Kourouna, which was found in the area during excavations. Koroni is also mentioned at the Homeric Epia, to be one of the cities which King Agamemnon had vowed to Achilles during the Trojan war. 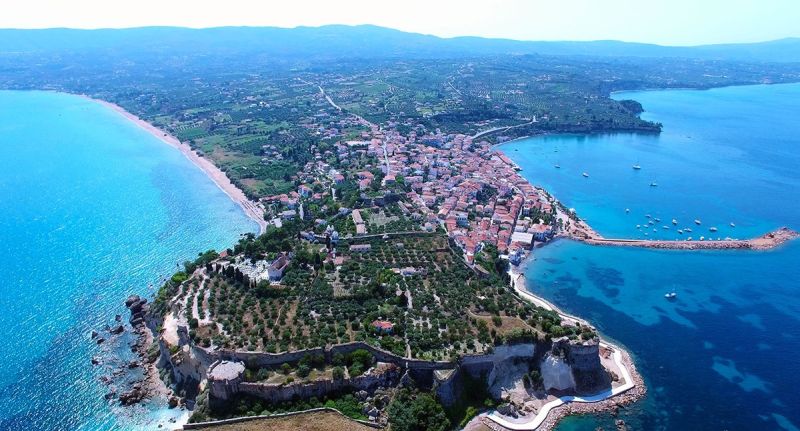 Built at the foot of the Taygetos Mountain and simultaneously in the inlet of the Messiniakos Gulf, Kalamata, the capital of Messinia is a place that can be visited all year through. It is located just 215 km from Patras and 240 km from Athens and is easily accessed not only overland (car, bus, train), but also by air, as there is an airport. Its original name, according to Homer, was Fares. An appellation which was replaced by the name “Kalamata “, in order to honour Virgin Mary (Greek: “Pangaea Kalimantan”). The Messenia capital, known for its olives and olive oil, charms its visitor with a multitude of attractions, such as the castle of Kalamata, which offers a panoramic view of Kalamata and the surrounding area.

Kalamata counts hundreds years of history and up to nowadays it has been, over the centuries, occupied by Sparta, Franks, Venetians and Turks, which gives the city a unique architectural character. Kalamatas history begins from Homer’s age, when an ancient city named “Fares” was mentioned. This ancient city was located at the same place where nowadays the Frankish castle of the city lies. In older times they believed that the sea covered the whole area around the city. But the findings of “Protoelladiki” and “Archaic” periods (the Sanctuary of Poseidon) in “Akovitika” and also the findings of Classical, Hellenistic and Roman times around the castle, proved the opposite. The major event of Kalamata’s long history is its liberation from the Turks on March 23, 1821. On that day Kolokotronis Nikitaras, Petrobeis Mavromichalis, Papaflessas and others entered the city as liberators. They participated in the solemn thanksgiving that took place in the Church of “Agii Apostoli”, a small Byzantine church of the 10th century, which still exists and is considered as the symbol of Kalamata.

Kalamata, a city of 58,000 residents, is the second most populous city in the Peloponnese after Patras. It is the most important urban, economic and commercial centre of the Messinia prefecture such as an administrative center. The region’s economy is based on agriculture, having as top product the famous olive oil and olives Kalamon (olives from Kalamata). There is also a significant production in figs, raisins and other vegetables. In the industrial sector, there are several industries of packing, agricultural product processing, distilleries, etc… The tourism industry of Kalamata developed especially during the last 20 years. Many hotels, restaurants and entertainment centres were built in order to meet the needs of the visitors of both Kalamata and the surrounding region. It has an interesting nightlife full of bustle all over the year. During the winter the nightlife runs mostly in the historical centre where most of the bars are located. During the summer months the fun transfers to clubs and beach bars nearby the sea. Among the most beautiful spots of Kalamata is the beach which extends in a length of 2.5 km. In a relatively short distance there are many beaches you can visit such as the beach of Mikri Mantinia or the beach of Almiros.