On the other hand heading south and east from homeport Kalamata, we’ll encounter even more unique and unspoiled destinations such as Kardamili, Limeni, magnificent Diros caves, Gerolimenas, the pirate den Porto Kagio, port of Githeio, the seductive Elafonisos, the island of Goddess Aphrodite Kythera.

All quiet places, off the beaten track, paradise of silence and water. In conclusion this part of Greece is very different to anything else you have ever seen before. It’s not just the stone houses, the winding roads, the crystal clear sea water and the ambiance. It’s also the actual terrain, with the low bushes, the dry rocks and the dramatic views.

The Mani Peninsula (Greek: Μάνη, Mánē), also long known by its medieval name Maina or Maïna (Μαΐνη), is a geographical and cultural region in Greece. The capital city of Mani is Aropoli. Mani is the central peninsula of the three which extend southwards from the Peloponnese in southern Greece. To the east is the Laconian Gulf, to the west the Messenian Gulf. The peninsula forms a continuation of the Taygetos mountain range, the western spine of the Peloponnese.

Until recent years many Mani villages could be reached only by sea. Today a narrow and winding road extends along the west coast from Kalamata to Areopoli, then south to Akrotainaro (the pointy cape which is the most southward soil of continental Greece) before it turns north toward Gytheio. Another road, that is used from the public buses in the line Piraeus – Mani and exists several decades now, comes from Tripoli through Sparta, Gytheio, Areopoli and ends in the Gerolimenas port near Cape Matapan.

The seductive Elafonisos: Seductive Elafonisos of turquoise crystal waters and the immense golden beaches will surprise every visitor. At the edge of the southeast Peloponnese, Elafonisos is one of the most beautiful Greek islands! Elafonisos is an island of magic anchorages. The most famous of all is the twin beach of Simos-Saracenico on the south eastern tip of the island. Another one is the beach Aglyfti on the south west of the island with pebbles, whose existence even the locals forget, as it is hidden with no road access. Your imagination dances delightedly along the infinite horizon and like just about you are a sailor or you are a person that comes here for a beach holiday, you will want to stay forever… a castaway on Elafonisos. Relax in its waters, experience onboard our gastronomic richness and live unique moments! Your window view? the pure white sandy beach , the translucent turquoise water, the thyme flavors and under the clear blue sky and the bright sun! 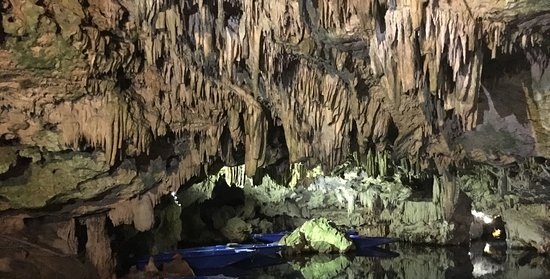 The caves of Diros are set along a beautiful bay on the south side of Areopoli, an archaeological site down the west side of Mani region of the Peloponnese peninsula, Mani. Investigated in the 1950s by Ioannis and Ioanna Perochilou, these caves are remarkable both for their natural features and archaeological significance. Vlichada is considered one of the most beautiful caves worldwide, with a depth of 3.5 kilometres. Many animal fossils dating around 2 million years old were found here. Pink, red and white colours characterise different parts of the cave. (Note: this may be the only one of the Diros caves open to the public). The other important Diros caves are Alepotripa, which was inhabited some time 5,300 years ago, and was also a burial spot of sorts. The cave revealed ceramic statues, marble relics, animal bones and more, many of which are on display nearby at the Neolithic museum of Diro. There is also Katafigi, considered the third cave of Diros 500 meters away from Vlichada. This cave has an area of 2,700 square meters. In addition to being inhabited by early farmers, this site was used for burial and cult purposes. Archaeological evidence has revealed that this is one of the largest Neolithic burial sites ever found in Europe. Two adult human skeletons were found at the site from a burial dating to the 4th millennium BC, as well as remains from at least 170 separate persons. Archaeologists are uncertain about the significance of a Mycenaen ossuary, which has been dated to the 2nd millennium BC and appears to have been reburied at Alepotrypa. While there is no direct evidence, it is possible that the ossuary may link Alepotrypa to Tainaron, which was regarded as the entrance to Hades in classical mythology.

Gerolimenas which is famous for its picturesque setting and it mainly consists of a small port. It used to be one of the most significant ports for trade serving the wider area and its name derives from the two Greek words “Ieros” – sacred and “Limin” – port, which give us a thorough idea of just how important it was in the past. Gerolimenas is situated in the heart of Mesa Mani (Inner Mani) and cherishes the charming cape of Cavo Grosso. The town of Kalamata is at 38 nautical miles and the port of Githio at 31 nm. Both towns constitute important towns of south Greece and are worthy of your visit while you explore the sites of this enchanting region. It is highly likely that you will feel as if located at a fishing village of Sicily. Its superb setting by the sea shores where the Ionian Sea meets the Aegean Sea connotes to scenes from a movie where people walk barefoot letting the waves tinkle their tows, where people indulge in exquisite local specialties and the only thing they “wear” is a permanent face of carefree pleasure. In the morning – and before you go for a revitalising swim – have an enjoyable walk along the narrow alleys of the village and admire the distinctive cultural identity and the unique architectural style of the stone tower houses. In the afternoon, the imposing rock at the cape of Cavo Grosso will beautifully complement the best sunsets you have ever seen, while the catch of the day will give you a tantalising experience of tasting the sea food delicacies at any of the numerous family tavernas by the beach of Gerolimenas. Gerolimenas has been undergoing a significantly encouraging period of development in the past few years. Apart from its natural beauty and ideal setting, this destination acquired a tourist boost from the creation of the luxurious boutique Kyrimai Hotel. This is not yet another boutique hotel. We would rather describe it as an aquatic paradise engulfed by the deep blue sea, in an ambience of absolute relaxation and serenity. The entire resort is made of stone and it is eternally caressed by the blue of the sea. Its hotel services and room amenities will make you feel that you deserve the best and will reassure you that you have made the best possible choice for an unforgettable getaway.